The birth and the development of Hotel Rufolo are due to the enterprise of the Schiavo family. From the second half of the XIX c. the Schiavo brothers managed one of the first hotels in Ravello and at the beginning of the XX c. Ferdinando, grandfather of the current owners, moved to the Via S.Francesco extending the business and at the same time his family, however he continued with the coffee restaurant in the main square. 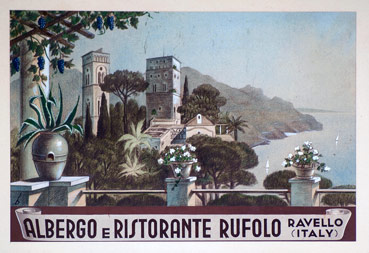 With the help of his son Alfredo, tenacious and creative, they started the development of the hotel with the first extension in the 1920s .After the war other works followed and in 1990s a total restoration programme was carried out.

Many famous guests stayed here :D:H.Lawrence stayed for long time in1926 and 1927 and started his masterpiece “Lady Chatterley’s lover”.

In the following years guests at the Hotel included president Einaudi, Togliatti,Almirante,Douglas Hurt and artists such as Rostropovich,Bruno Walter, Carla Fracci and Alida Valli, Charles Bronson and writer Domenico Rea, the French writer Lucette Desvignes who stayed several times and wrote in the hotel visitors book: “From the medieval towers to the infinity of the sea, all belongs to you: mountains, coast, lemon valley or vineyard , magic garden, Moorish cloister, Byzantine cupolas, pine trees, all is yours and you take it with you when you leave”.